Since 2004 Google has been in widespread use, and there are now generations of people who have grown up using Google on a daily basis.

These are the same people that have grown up in an age of technology, using mobile phones and specifically SMS text messaging. It has long been argued that text messaging has negatively impacted people’s ability to spell and use grammar correctly, particularly in formal writing.

Google is similarly positioned to exert such negative influence and I’ll attempt to show how it could be doing using an example from the world of retail.

I was actually working for a client in the retail sector who sells clothing when I came across some shocking examples of the use, or rather misuse, of the apostrophe within meta titles and descriptions belonging to some of the major UK retailers.

Sorry if you find this next section a little patronising, but I’m going to assume that everyone reading this has had their understanding of grammar impaired by the continued use of search engines and mobile phones.

I’ll get the first one out of the way immediately, there is no such word as “mens”. “Men” is already a plural and so does not need pluralising in this way. This also makes “mens’…” inaccurate. The correct plural possessive (as the clothing ‘belongs’ to men) is therefore “men’s”.

Now let’s see which of the top 7 retailers got this one right in their meta title and description: As we can see, all of the retailers have used the grammatically incorrect version, although interestingly Republic has chosen to optimise for both “mens” and “men’s”.

The rule for “women” is exactly the same as for “men” above. The correct use is therefore “women’s clothing”.

Again let’s see which of the top 7 ranking retailers got this one correct in their meta title and description: Many more retailers seem to have got this correct, the reason for which I shall return to later.

This is probably the most tricky one of the three examples I’ve provided. “Ladies” refers to more than one ‘lady’, whilst “lady’s clothing” would refer to one particular lady’s clothing. The correct choice is “ladies’ clothing” with the apostrophe after the ‘s’ being used to signify possession (the clothing ‘belongs’ to the ladies).

Not many of the major retailers seem to be targeting this keyword, but those that were all seemed to have opted for “ladies…” and not “ladies’…”

Why Do Google Not Auto-correct?

This confused me somewhat. Normally if you spell something incorrectly Google will either automatically correct your spelling, or at least suggest what it thinks you might mean. Enter “mens clothing” however and… nothing. Not a sausage.

Do Google not know that “mens” is not a word? Do they not have a good grasp of grammar? It’s difficult to believe that this is the case, though I’m at pains to offer an alternative explanation. This is made all the more confusing when you search for “womens clothing” and Google asks if you meant “women’s clothing” – why do it for ‘womens’ and not ‘mens’!?

Why Are Retailers Getting it Wrong?

The first thing to establish here is, are retailers actually getting it wrong, or are they purposefully using incorrect constructions in order to target the most popular search terms? According to Adwords, “mens clothing” is searched for 40,500 times monthly (locally in the UK, using exact match), compared to just 73 times for “men’s clothing”. That is a staggering statistic.

The SERPs for “mens clothing” and “men’s clothing” are different too, so Google are definitely not ignoring the apostrophe in this instance. From this perspective you can completely understand why retailers are using incorrect spellings within their meta titles. Some retailers, such as Republic even use both “mens” and “men’s”. One can only assume that the misspellings within the meta descriptions represent a lack of SEO knowledge (meta descriptions aren’t used for rankings), or are an attempt to maintain consistency (I’m probably being generous here).

I guess that retailers, or at least the people who do their SEO, have to decide whether it is more important to be correct, or to use the construction that most people use. I suspect that the latter option will win on most occasions when sales are at stake, at least when the difference in search volumes between the two is so pronounced. I just really thought that as an industry, we’d got beyond the whole incorrect spelling for SEO thing.

If they autocorrected searches for “mens clothing” to “men’s clothing”, and their autocomplete also selected the correct variant, people would begin to search in this way and retailers would have to optimise for the correct spelling. You can already see evidence of this above, with many more retailers using the grammatically correct “women’s clothing”, quite probably because Google suggests that particular spelling.

So far I’ve spoken only of the influence upon people’s search behaviour, but it’s possible that repeated incorrect grammar use online could spread beyond search engines and into general language use. The aforementioned links between text message speak and a decline in literacy are often disputed. Indeed, renowned linguist David Crystal has categorically stated that he believes any such link is a myth.

I would argue that there is a clear distinction between txt spk and standard language use though, whereas the distinction between “mens” and “men’s” is less clear. Children and impressionable adults are much more likely to believe that “mens” is acceptable language use, and to use it themselves, than they are likely to think that “gr8” is fine to use in formal writing. People often learn by imitation, and Google along with retailers and SEOs, are not setting the best possible example.

So come on Google, you can do better.

Dan Almond studied English at The University of Liverpool and works at Piranha Internet, a  Preston SEO Company. He regularly blogs about all things SEO and social media on the Piranha Internet blog.

Personalized search is one of the controversial Google’s babies: first, it might sound great that you are supposed to be given just what you want (on the other hand, it is still questionable the machine can know better what I am up to); secondly, personalized search has become the real headache for SEOs: ranking fluctuations… 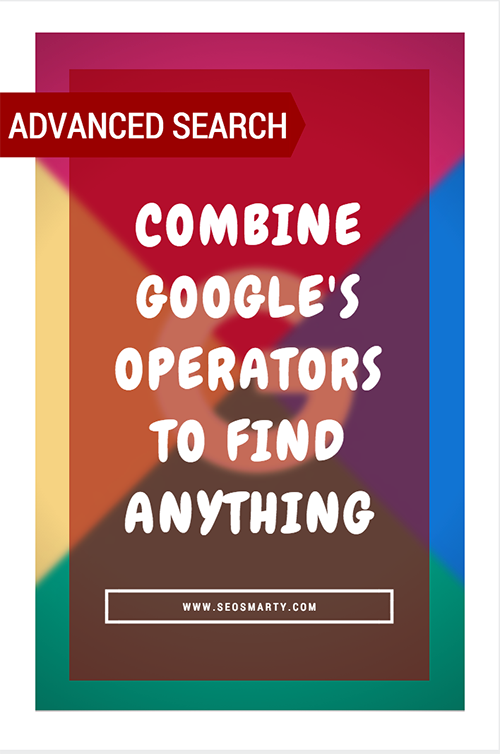 If I have learned anything since I started this blog is to find anything in Google almost momentarily. I can quickly find the source of a quote, the original image or the official documentation for anything. At college they used to say that you don’t need to (and you cannot) know answers to all questions:…

[Update: This trick seems to have been discontinued] It is amazing how many new things we may discover in very familiar services by just experimenting… I’ve been using Google for ages and I am quite familiar with its advanced operators but I just discovered a new one a couple of week ago. Actually, I’ve been…

Past weekend was one of the rare occasions when I didn’t go anywhere with my family and decided to stay at home to get prepared for my presentation at soon-to-come PubCon New Orleans where I am speaking on optimizing your content marketing to Google’s authorship and potential Google AuthorRank update. Hence I had some quality…

Content brainstorming is hard. The most obvious question we always face is: Where to start? To me the answer is obvious: Whenever in doubt, go to Google! This article describes my tricks searching Google to find what to blog next. It can be used in any niche (scroll down to the actual cheatsheet with the…

I am sure that most of you already know and use the following search operators when planning an SEO campaign. But from my own experience, you don’t often use even what you are well aware of just because things tend to slip your mind. So that’s rather a reminder of the tools search engines kindly…